– which is just about everywhere.

Of course, electricity comes from lots of different types of socket – from a normal domestic power point, to high-speed dedicated chargers.

While there’s basic information below, if you want the lots of technical information, you can delve deeper here.

How fast you charge depends essentially on 3 factors:

1) How charged your battery is – When you charge, your battery will charge faster when it has less stored charge and slower as it gets full.  This is more noticeable at Superchargers, but as a rule, regardless of how fast you charge, once you get towards 100%, your rate of charge will slow dramatically.  For this reason, it’s often better to charge up to 80 or 90% and keep driving unless you really need that extra range – also your battery will last much longer if you don’t charge to 100% all the time anyway.

2) AC – If you’re charging on AC, which is most places, your charging rate is limited by:

3) DC – If you’re charging on DC, which means you’re using a Supercharger, a CCS-Combo2 (CCS2) or a CHAdeMO charger, the rate is governed by the charger. Superchargers and CCS2 max out at about 150-250kW and CHAdeMO adapters at about 50kW.

What cables do you need?

Your Australian Tesla (unless you have a first-generation roadster) has a charge port with a “Type 2” connector which we share with much of the world – sometimes called a  “Mennekes” connector. This is not the same connector as used in America (or some other markets). Model 3’s also have a CCS Combo 2 extension to this socket: 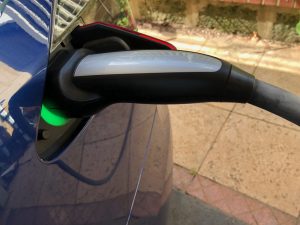 Depending on your car, your charge port will have either a motorised flap or a manual one, and a single status light, or a set of smaller lights.

Tesla-supplied cables have a button for both opening the flap, and unlocking the charger before removal.  Third-party cables don’t have this button, but you can just push on the flap to open the motorised ones once you’ve unlocked the car (or you can open it from the charging screen in the car).

This single connector is able to connect to single or 3-phase AC from standard sockets or various types of dedicated charger, to a Tesla Supercharger, a CCS2 connector (natively for Model 3, or via an adapter for S/X). Model S and X can connect to a CHAdeMO DC charger with an adapter.  We’ll cover the differences later.

If you only plan to charge at home, from household plugs and from Superchargers, you don’t need to buy anything, as you get cables for those with your Tesla.  If you plan to travel further afield, or would like to be able to use the full range of charging infrastructure, you may wish to buy some extras.

TOCWA has a set of loan cables if you are planning a trip and want the peace of mind without spending any extra money, or you’d just like to try them out.

Your Tesla comes with two cables: 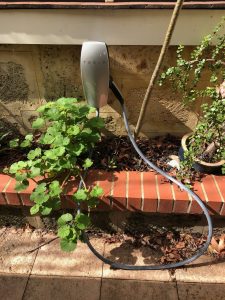 The HPWC is designed to be permanently installed in your house or workplace. It’s installed by an electrician and depending on your supply, it can deliver up to the maximum rate that your onboard charger can take.  Often, this is limted to around 7-11kW by building wiring, but it is still the perfect charger for using when you’re parked.  This is by far the most common way you’re likely to charge.  The one pictured above is installed in an outdoor carport, and they are happy in just about any environment.  Tesla also give these chargers to “destinations” such as hotels and restaurants and these show up on your car’s charging map automatically.  If you would like an additional HPWC for your workplace, they are also available for purchase for $700 from Tesla.

This cable is actually a chargepoint that you can carry around.  It comes with a standard 10A, 240V plug in Australia, and this will give you 2kW – it’s great for overnight stays where there is no other infrastructure, and will roughly give you 1/3 of your battery back overnight. Regardless of the version you have, the UMC can be fitted with different ends, or “tails” – the Gen1 comes with a 10A (2kW) tail only, but the Gen2 comes with both a 10A (2kW) and 15A (3kW) tail.  Both of these can be supplemented with additional tails that allow you to connect to Australian 3-phase connectors allowing for up to 7kW on Gen2 (32A/single phase) or 11kW on Gen1 (16A/3-phase).

For Gen1 UMC, you can purchase an adapter from Tesla that converts it to 3-phase: 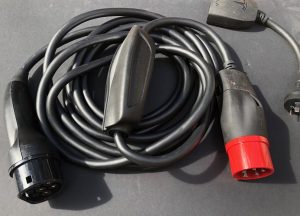 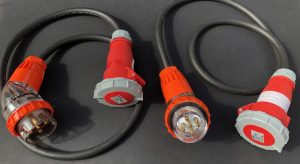 Becuase we share our Tesla specifications with Europe, the connector is a standard European 3-Phase one – if you’re in Europe, you can just plug this into the wall, but Australia has a different plug standard.  There are two different common sizes of plug – 32A capable and 20A capable – although the 32A version is much more common, so to use these, you need an additional piece or two as pictured. Remember, though, that the Gen1 UMC can only do 11kW – a maximum of 16A draw on 3-phase.

For Gen2 UMC, can charge at up to 32A, single-phase for 7kW.  The most likely connector you’ll find for this in Australia is a 32A 3-phase plug, from which you can pull from one of the phases with a special tail which is made from a 32A official Tesla tail from another market, with the plug replaced with an Australian plug. 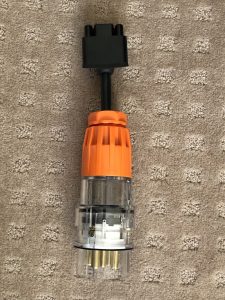 You can also replace the standard mobile charger with third-party ones that can do more than 11kW, such as the JuiceBooster.

There are four other connectors you might come across:

CCS2 is an extension of the standard Type-2 socket that allows from DC Charging.  As noted above, Model 3’s have this connector as standard, and can therefore use these chargers without adapters:

For Model S and X owners, if your car was built after May 2019, you can use an adapter supplied by Tesla to connect a CCS2 charger to your car’s socket: 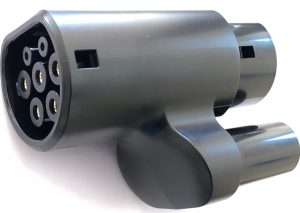 Cars built before May 2019 can have this option “retro-fitted” to their internal charger for approximately $800.

CHAdeMO is a clever French/Japanese portmanteau that means both “Charge de move” and “(o)cha de mo ikaga desuka” (“do you want some tea?”).  it is also an international standard for DC charging of electric vehicles.  Tesla sell an adapter which works on Model S and X, but not on 3: 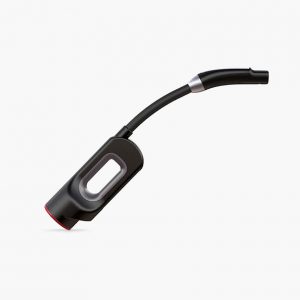 This adapter allows the bulky CHAdeMO connector to interface with the Tesla connector and supports high-speed charging at up to 50kW from dedicated chargers, like the RAC chargers in various locations in the south-west and in Perth and also the charger at the UWA Club. 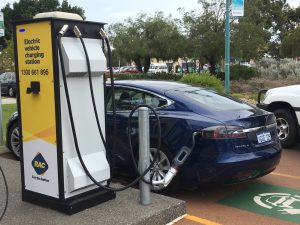 Tesla sell this adapter for $690. TOCWA has a Tesla-CHAdeMO adapter that members can borrow free of charge.

Many chargers, such as the Tesla HPWC and the RAC chargers have a tethered cable with a Type-2 connector that you can use without needing anything else, but in many locations, such as at the Synergy chargers at Home Base, Subiaco, there are chargers with a Type-2 socket. At these locations, you need a Type-2 to Type-2 cable with you: TOCWA has two Type-2 to Type-2 cables that members can borrow and we soon hope to have a supply for sale.  You can also buy one from Tesla for $305.

In some locations, such as some City of Perth car parks like the Exhibition Centre and Pier St, you will also find older “Type-1” connectors.  These are electrically compatible with “Type-2”, but they only supply single-phase.  You can get an adapter: 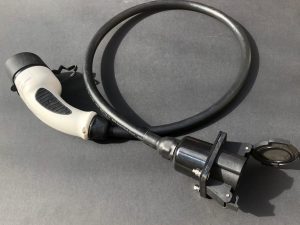 The adapter takes the Type-1 tethered plug and adapts it to the Type-2 chargeport. 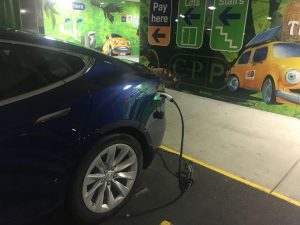 So – What cables do you need?

• at home
• at Superchargers
• at third-party CCS2 chargers (for 3, and late/retrofitted S/X)
• at chargers with tethered Type-2 connectors (such as Tesla’s distination chargers and the RAC ones)
• at any location with a household power socket

You may well want to get a Type-2 to Type-2 cable, as these are becoming more common, especially as all new EVs coming onto the market also use Type-2 connectors.

There are few sites that still have Type-1 connectors, and they are aften quite slow, so unless you routinely park at the convention centre or Pier St, for example, it’s unlikely you’ll need a Type-1 to Type-2.

If you want to be able to charge at high-speed from third-party rapid chargers, and you own a Model S or X, you may want to get either a CCS2-adapter (and possibly retro-fit), or a  CHAdeMO adapter, or you can choose to borrow club adapters when you go on trips.

If you plan to travel longer distances further out of town, then a set of 3-phase tails are worth investing in – there are many locations that have avalable 3-phase connectors, and the AEVA round-Australia route is mostly made up of these sockets – again, you are welcome to borrow TOCWA’s set when you go on trips.