You may have seen the infamous episode of a popular car show where they end up pushing an EV onto a trailer after a few laps around a track.

As the question is often asked, let’s see how much effort it takes to run out of charge.

The Tesla on-board computer gives a number of notifications as the battery state of charge reduces,  let’s count them down:

1. The on-board computer will display a icon on the centre of the touchscreen with the following message: ! Plan Your Next Charge. You are almost too far from known charging locations. There appears to be about 50kms of buffer built into the warning,  if the car is 40kms from a known charge point the message will show at approximately 90kms remaining. This message is difficult to miss and needs to be manually removed.

2. The touchscreen message is repeated after approximately another 8kms, once again the message needs to be manually removed. 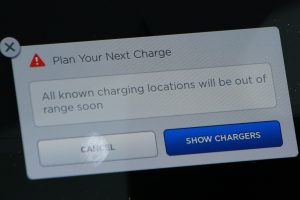 3. When the car’s typical range goes below 80kms remaining the battery icon located close to the speedo changes from Green to Amber.

4. As the typical range remaining drops below 30kms the battery icon will change from Amber to Red, the power indicator directly in front of the driver will display a dotted line showing that power has been limited, the power available is still more than enough to drive at highway speeds and keep up with traffic flow.

(Think carefully now, this is the 4th warning the driver’s had, if an airbag, drive unit or any other warning light came on the driver will show concern and ring service, at this stage the driver should really be looking for the closest power point rather than risking the need to call a tow truck when the car stops on its own.)

5. At zero kms remaining the vehicle may not stop but will continue on with reduced power.  The power limiter warning will still show.

6. Eventually the car will reduce power considerably and will only continue at a speed of less than 60km/h until power is no longer available and the car coasts to a stop, this could be anywhere between 1 and 25kms past zero.

By the time the car has shut down 6 different warnings has been issued to the driver, enough for even a person of limited intelligence to notice them, to be honest only a Buffoon could run out of charge. 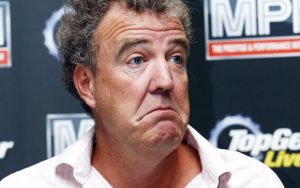 Footnote:  In early August 2017 a Tesla with 107,000km on the Odometer shut down its drive-train power with an apparent 14km remaining.  Shortly after the car stopped the range dropped to zero. The owner has put this down to the battery management system being out of calibration. If you heed the 4th warning you should never have a problem.

2 Replies to “What if my car runs out of charge?”