On November 19th, members of TOCWA are participating in a world record attempt to charge as many EVs simultaneously in one location: 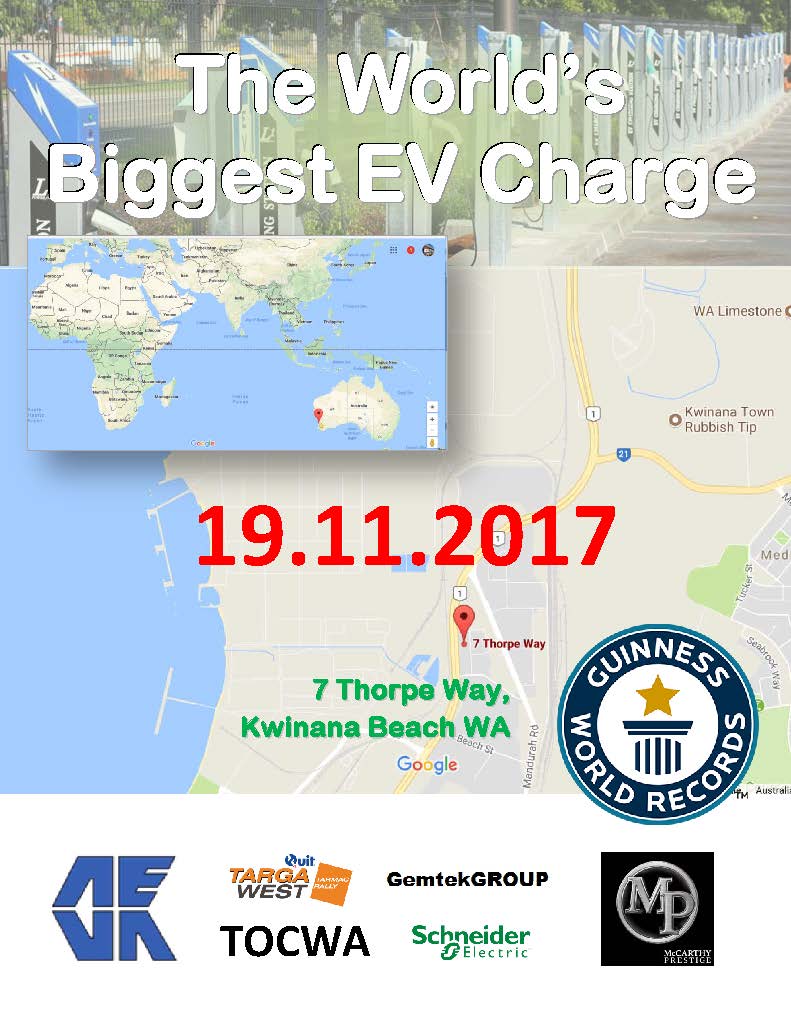 If you have a recent 75D model S or X that was built before July 2017, you can get it “uncorked” to the same performance as the post July 2017 ones now – it depends on components and age, but well worth checking.

One owner had theirs done today, and has noticed a significant improvement in performance.

This is one of the really unique things about Tesla – how many other cars have you owned where months after the original purchase, you get a free power upgrade?

In 2014 Tesla advised that they would ship the first cars to Australia – there would be no servicing support or charging in WA – despite this, eight said yes.

They were transhipped from Sydney in December 2014 after the Sydney Grand Opening and arrived here in February 2015.

Original owners received a single phase 40amp wall charger, and were delighted to discover the UWA REV chargers (30amp single phase) around Perth. The Tesla mobile charger was not available at delivery, so we could not escape the metro area.  UWA imported a Percedos 16amp single phase charger for us from Germany, but when it arrived it was restricted to 13amps so as not to exceed the capacity of the 15amp caravan park sockets. It did, however, enable us to break out of Perth.

Some early long drives in WA include:

20 hours charge in Dongara, 40 hours plugged into Kalbarri laundry and 20 hours Jurien Bay through a motel window – only 10/13 amps via the Percedos.

Then 3 Phase pigtails with the red Euro connector for the Tesla UMC and other external EVSEs became available,  we started supplying 3 phase sockets to fill the gaps, and planning 3phase trips.

All 3phase (arranged by sending AEVA 3phase sockets in advance), except 15amps overnight at Caiguna.

Tesla Superchargers from Melbourne to Brisbane (via Sydney) and 3phase, External EVSE, 10m 32amp 3phase extension cable and 32A and 20A pigtails. Dual on board chargers.

Some 3 phase, but 4 EVSEs failed. Balanced dual 15amp octopus charger, 17kw on board charger. Max of 700kms in one day.

Mixture of 3phase and single phase. All 3phase (arranged by sending AEVA 3phase sockets and installing Tesla wall connectors in advance). Single 11kw on board charger. Max of 720kms in one day. 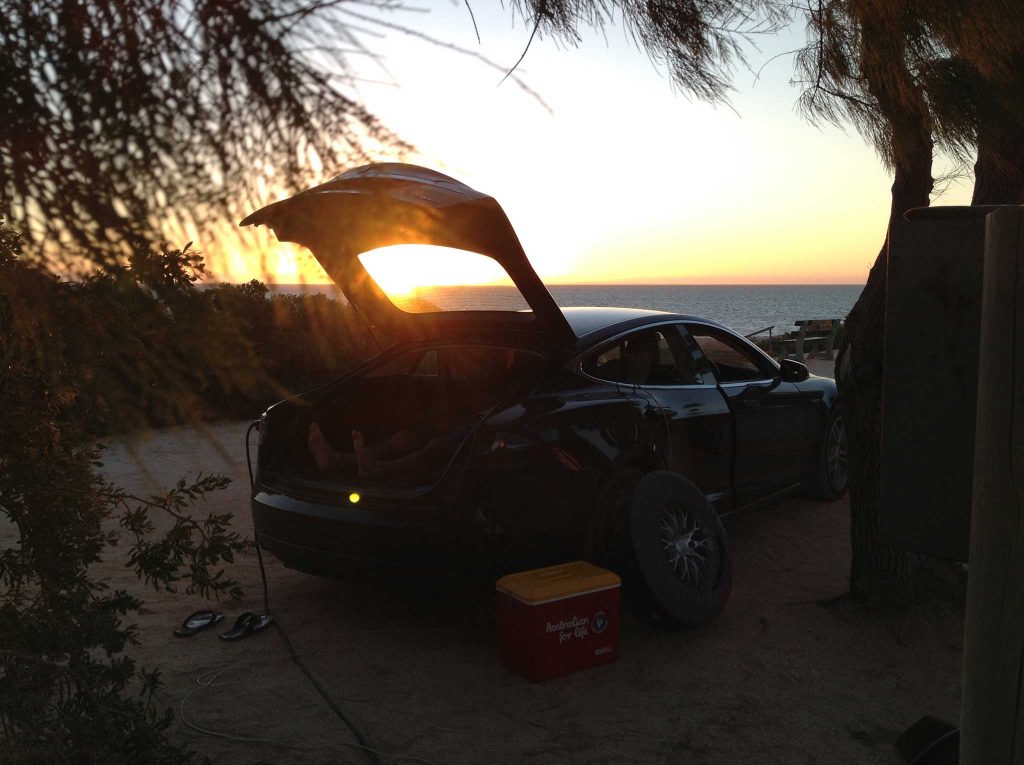 The AESY group (AEVA sponsored by Synergy) are trying to cover all the main roads in WA in a 100kms grid of 3-phase sockets. If you any ideas for locations please contact the AESY member below:

3-phase tails for use with your Tesla-supplied mobile charger,

ChaDeMo adapter for use at the UWA fast charger and the RAC Electric Highway chargers,

Type1 adapter for use at chargers such as at the convention centre, Leederville and Garden City,

Type2-Type2 cable for use at chargers such as Home Base Subiaco.

We will also soon have available to members, discounted cables for purchase.  If you are interested, or would like to borrow a cable, please get in touch.

STEPHANIE: I suggest it is pretty unlikely that you would imagine riding around the red dust in an electric car but here’s the thing there is a big push under way at the moment to make the Kimberley electric car ready. That means getting charging points every hundred kms or so. The Kimberley is one of the last frontiers for electric cars, but believe it or not even now it’s possible to drive from Broome to Kununurra in an electric car. David Lloyd is an electric car enthusiast, and that’s to save the least. He’s the secretary of the Tesla Owners Club Western Australia and a member of AEVA. Good morning David.

DAVID: Good morning Stephanie How are you.

STEPHANIE: I’m not too bad. First of all you’ve driven from Perth to Broome in an electric car. What was that like.

DAVID: Ah it was so much fun – that was in the early days before we had 3-phase installed everywhere. This makes the charging 3 times as fast. We had to try to cover the gaps, working out the wind and elevations.

We had to charge at 80 mile beach in a welding shed there and then drive the 380 kms to Broome which was near the limit of the range of the car at that time. That was fine but we had a big easterly which effects the range, so we had to turn the AC off and arrive dripping into Broome. That was a great adventure. It is all different now since Eco Beach are installing 3-phase and the car’s range is now 500kms.

STEPHANIE: So even then even before there was a big movement to get electric cars it was possible. It is just that it took someone like you who is a little bit fanatical perhaps about electric cars to make it happen.

DAVID: Yes. We did that run in October 2016. A couple of people had done it before without any 3-phase which is even more remarkable.

STEPHANIE: It’s quite incredible to think that things have changed so quickly already since October 2016 I mean that just over a year ago.

DAVID: Yes, Tesla have done a big push here at our request, but also AEVA (Australian Electric Vehicle Association). We have partnered with Synergy to distribute ordinary commercial 3-phase sockets, as you see in welding sheds. Now all cars can use these, all EVs can charge from them, they give 22kw of power which is about 100kms of range per hour. They are perfectly viable but just don’t look as pretty.

STEPHANIE: Now tell me a little bit about this new push to get the Kimberley completely electric car suitable.

DAVID: So, AEVA has decided to reduce the gaps from 300kms which is suitable for the older Teslas (now 500 kms for new Teslas). We want to reduce that down to a 100kms grid over all main roads in WA, and to do that we have got to talk to all the roadhouses, hotels, restaurants everywhere on the road. In some cases unfortunately there is not even a kettle every hundred kms so we cannot do 100kms in Kimberley but we can get it down to 150kms. Larrawa Station has just joined up for instance. We are talking to all the stations, so they can get in on the act. Once the 3phase sockets are installed, then the route will be very easy for a number of cars because there will be choices of where to charge. You won’t have to charge at every point and can skip them and go onto the next one.

STEPHANIE: How much would it cost if you are station owner. For example would you give a certain amount of money and expenses to charge up an electric car.

DAVID: Well we offer to pay for electricity certainly and if generated locally it is more expensive. So the owner of the facility would charge the EV owner for the electricity. Even generated electricity is cheaper than buying petrol -we get more range out of the electricity per $ than petrol cars. We can supply the sockets free to any location in the Kimberley that wants to have one and fits into our grid, let us know. We will post one out to you. All you have to do is install it.

Then you can get customers staying at your premises, buying your meals or staying overnight with you.

And you can charge for electricity as you wish- it is up the location.

STEPHANIE: And here’s the thing you guys are going to be captive while you’re charging your car. Not as quick as filling a tank of petrol. So you do have a bit of a captive audience.

DAVID: That’s right we are even targeting service stations since they can make more money selling electricity than petrol. The margins are higher. We will hang around a bit more. We will go shopping, go to the stores, patronise the local businesses as well, and go to the local tourist sites in the area of course.

For a day charge EVs will spend longer.

In practice however with a 500kms range, mostly we will only need to charge at night and this takes just 20 seconds to plug in and leave the car and thats it.  But we will be staying with a local service provider obviously and buying meals locally. It’s good for tourism.

STEPHANIE: Now you obviously as I said earlier been driving around in an electric car before people thought that it was possible even. Are you going to miss these adventuring days where electric cars and charging stations are not that common place.

DAVID: Yes definitely definitely it has been a wonderful experience being one of the pioneers. It is so much fun planning the routes, working out the distance to go and time to go. Sometimes you turn up to a socket and there is no power. It has been great fun.

It’s going to become commonplace. The market is going to be flooded with EVs. The Tesla model 3 is only US$35,000 so it will change the market totally. There will be 100s of thousands of them coming.

The pioneering days are over unfortunately.

STEPHANIE: David thanks so much for your time, OK.

DAVID: It has been a pleasure, Stephanie.

STEPHANIE: That was David Lloyd – he is an electric car enthusiast definitely loves his electric car.

It would be great to prove Stephanie wrong and show her the cars in Broome at the ABC office soon!

Members of TOCWA and AEVA visited the Greenbushes Lithium mine in South-western WA.  The mine is blessed with some of the highest-grade lithium deposits in the world and is expanding to meet the growing demand.  There was a display and meeting in Greenbushes and then a bus tour of the mine site and works. 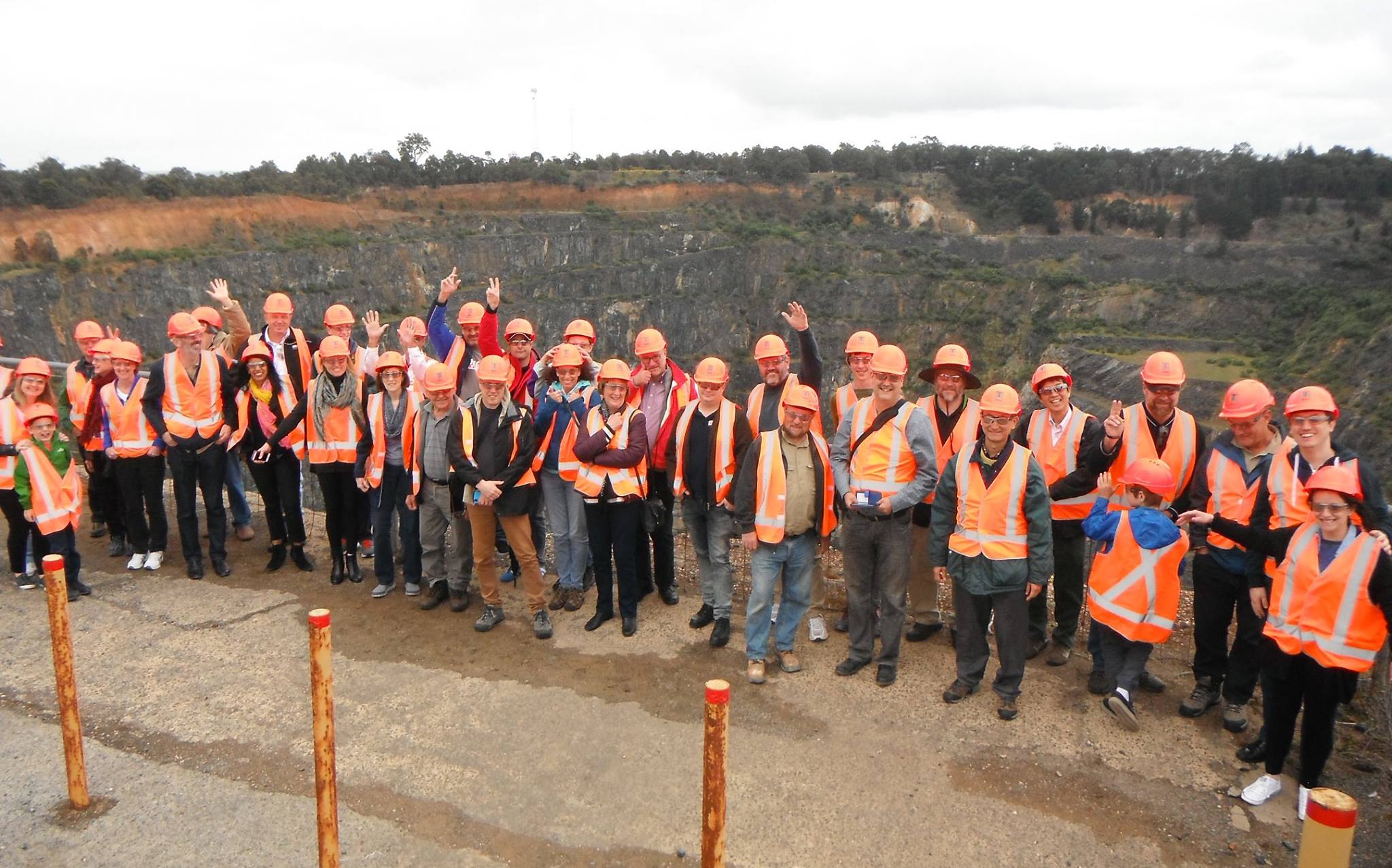 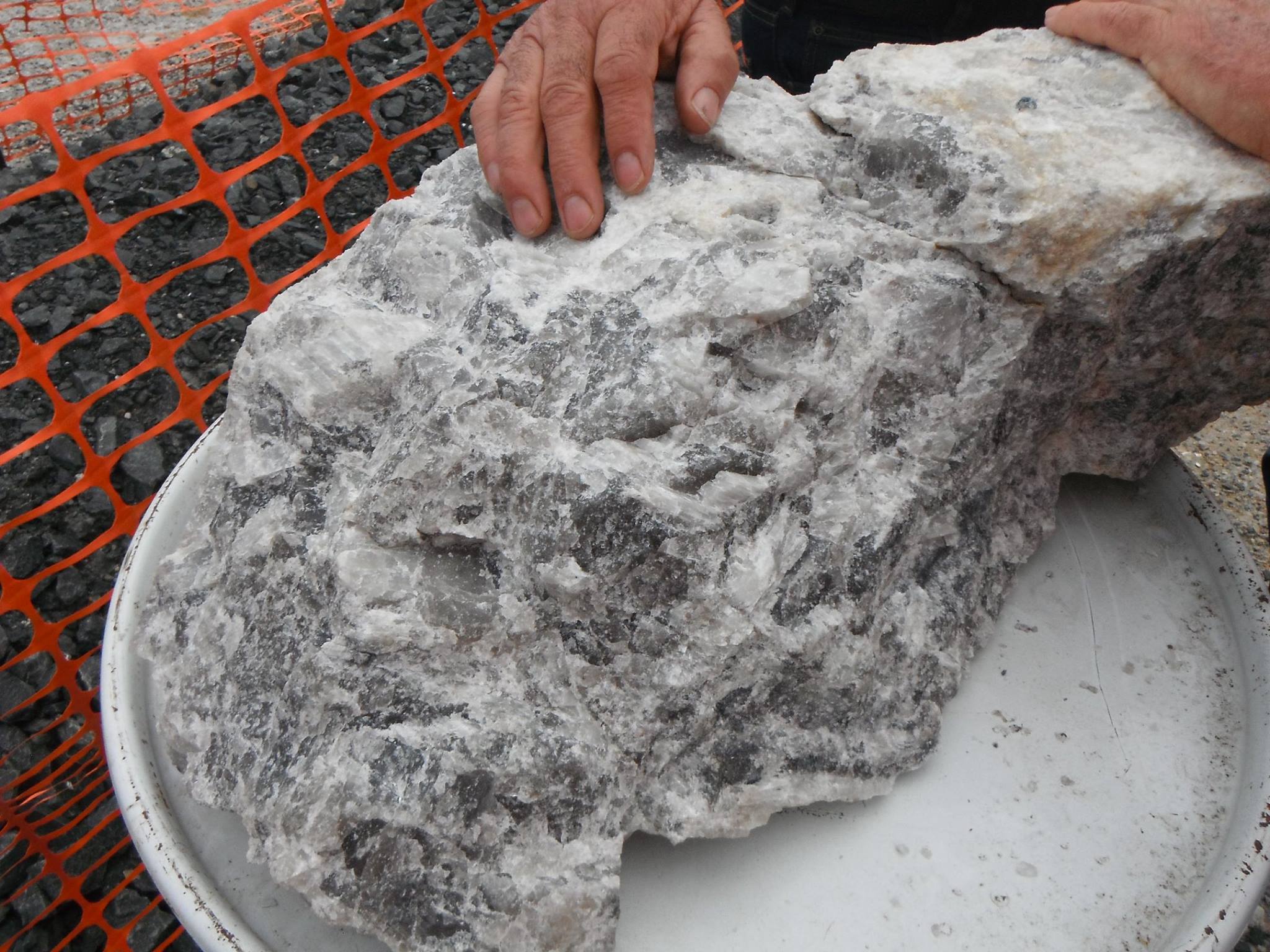 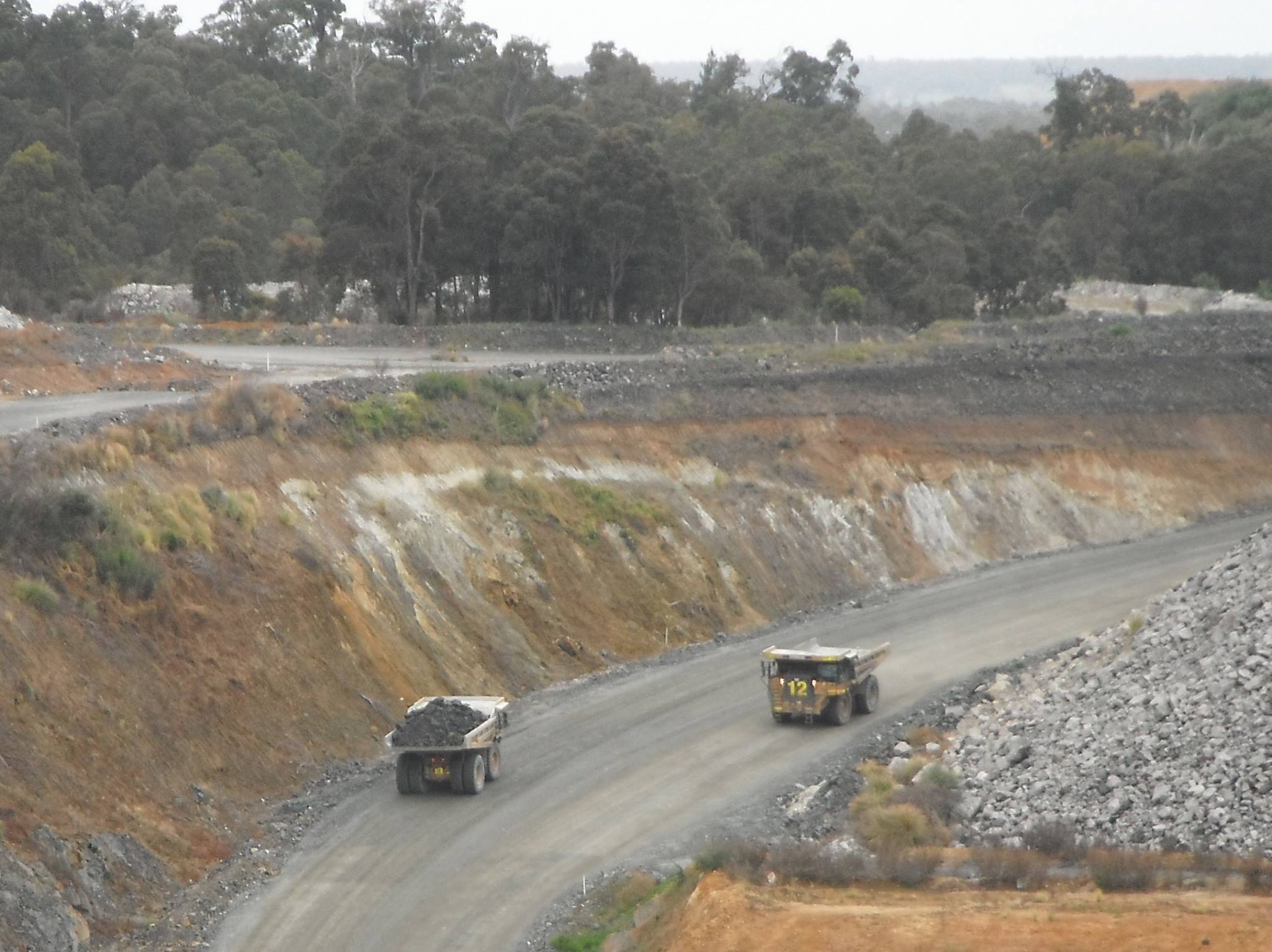 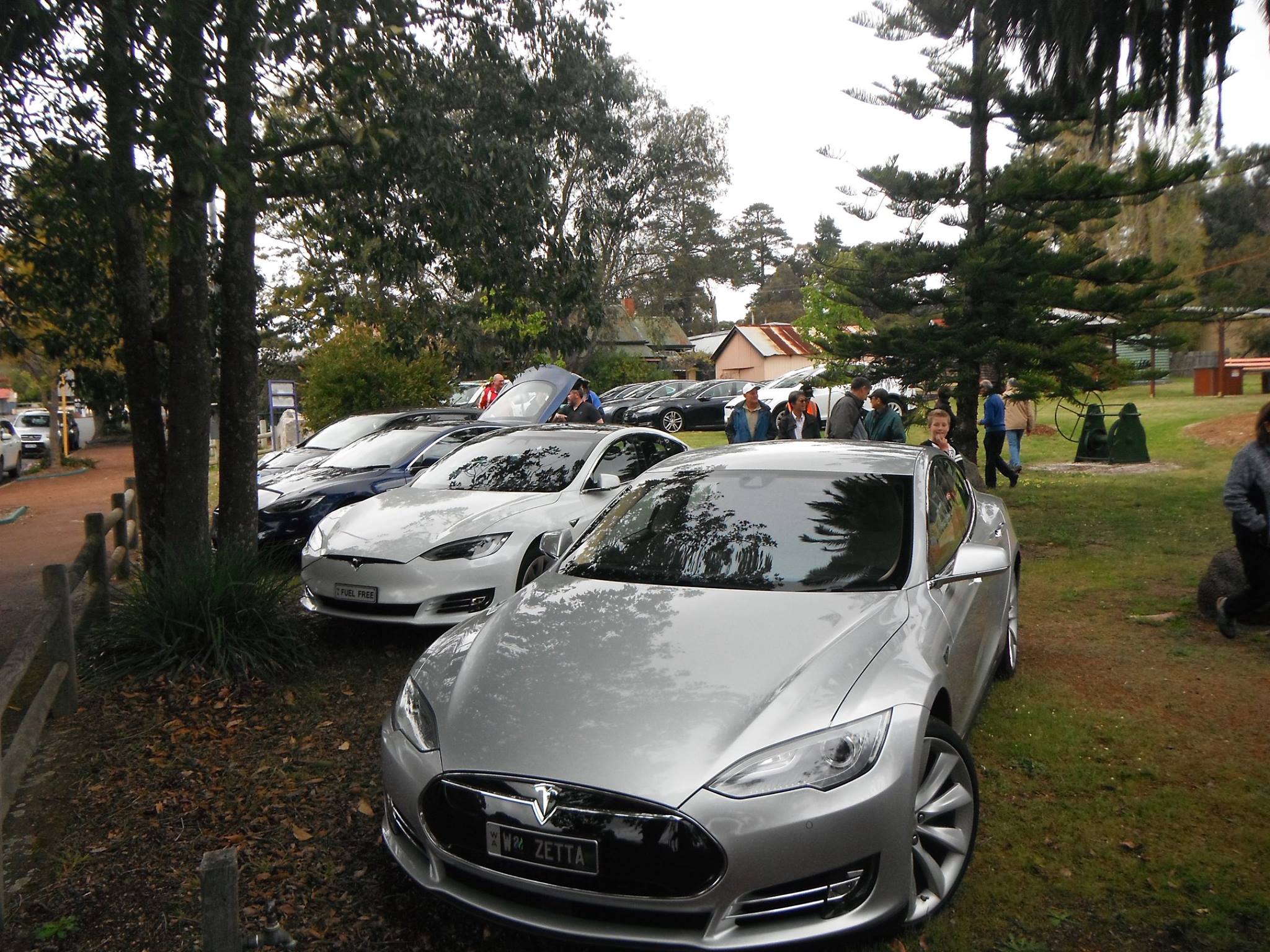 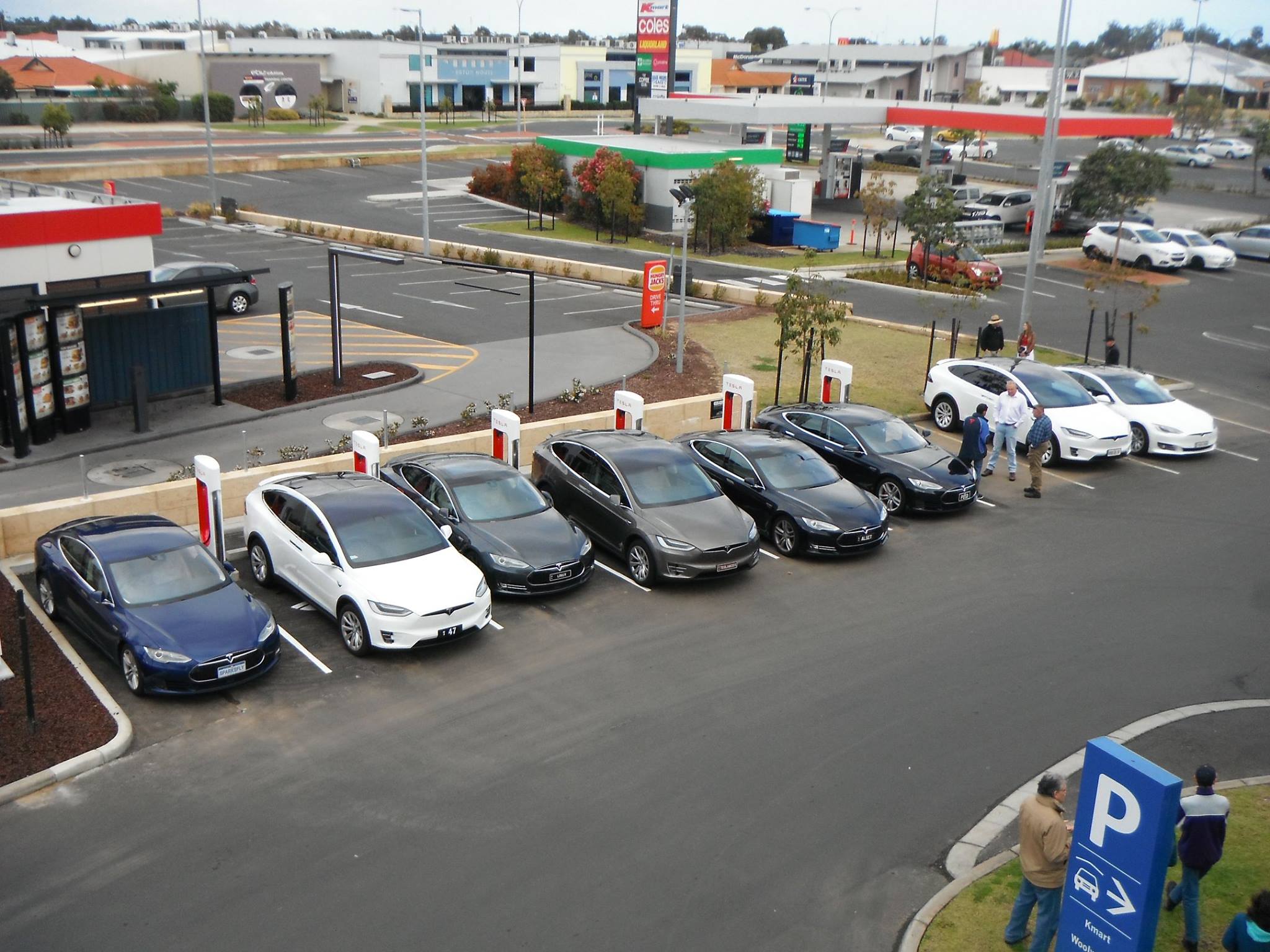 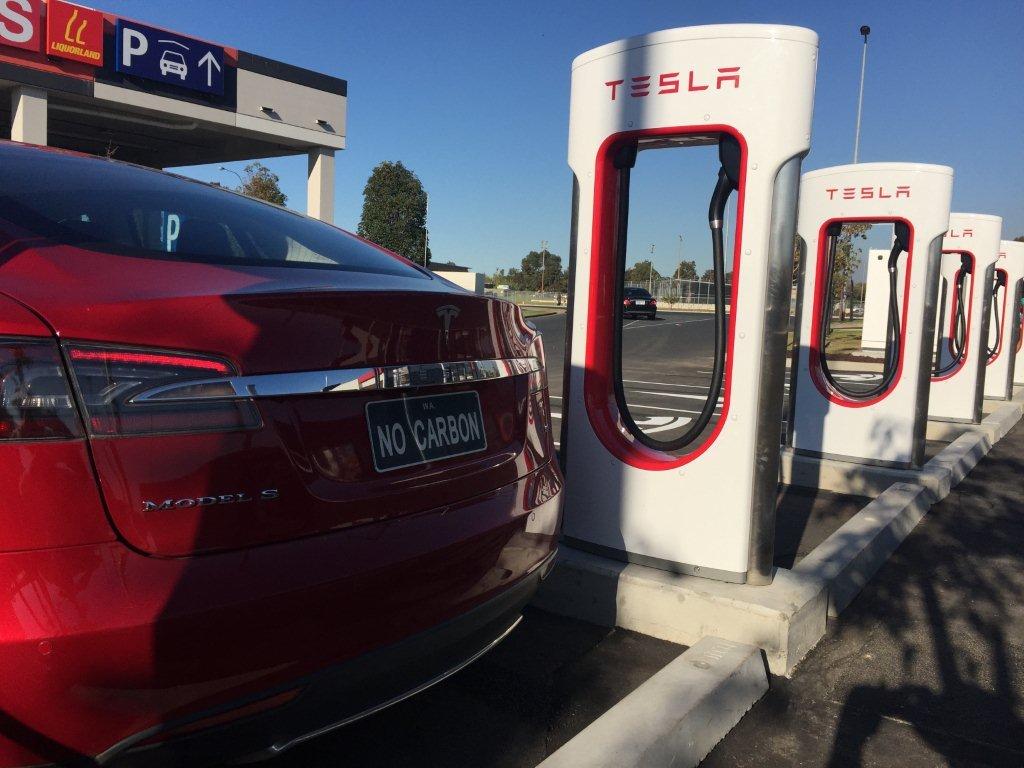 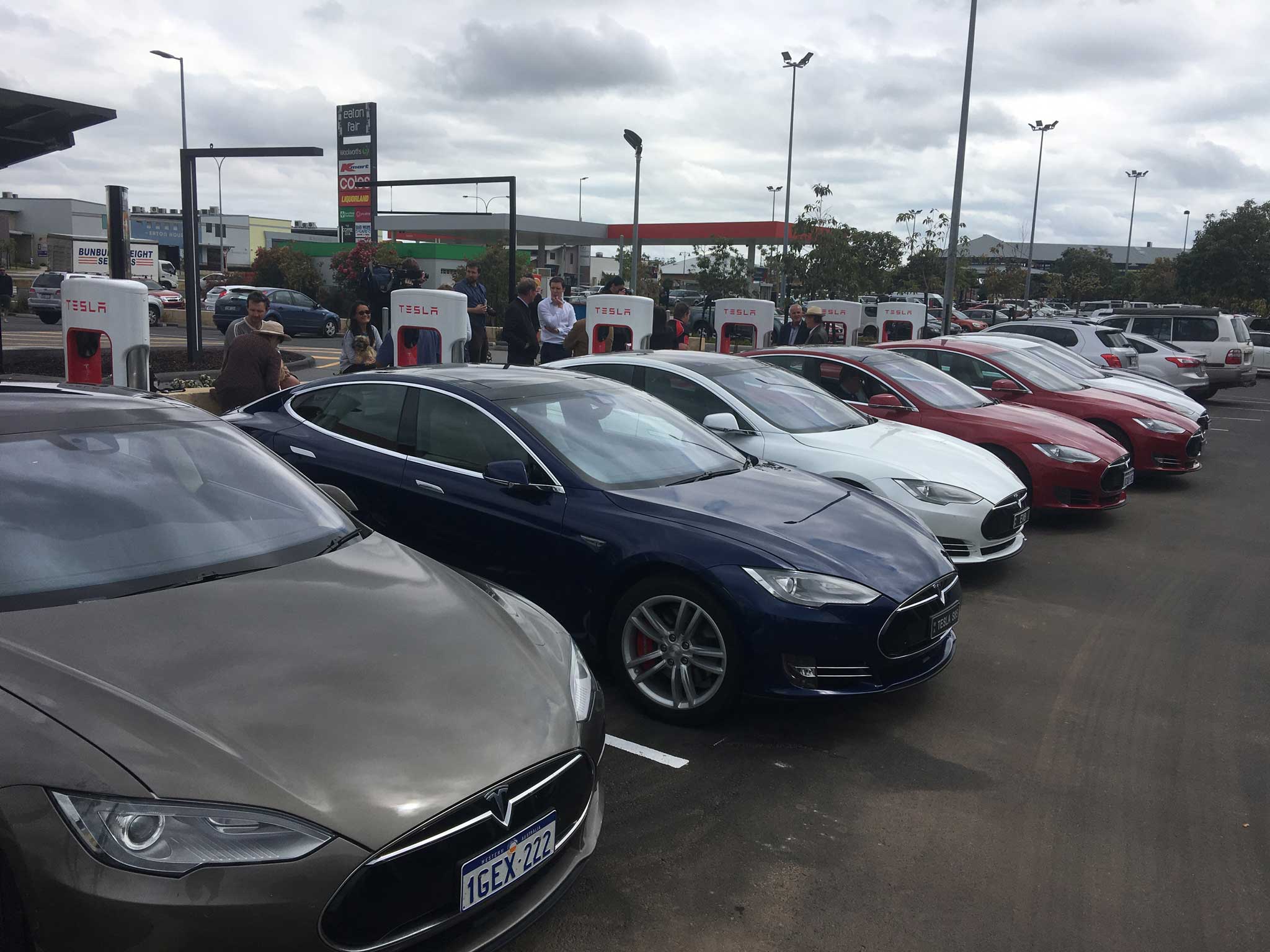 The Eaton Fair shopping centre will be holding a Supercharger opening event on Friday at 1.00pm at Western Australia’s first Tesla Supercharger.

The Supercharger is near the corner of Council Drive and Recreation Drive, Eaton.

Here’s today’s picture of the new Eaton Supercharger site – it’s very close to complete, and we are hoping it will be commissioned in the next few days TOCWA members’ cars were on show today the Como Rotary car show at Wesley College – if you came and said hello, and would like more information, get in touch. 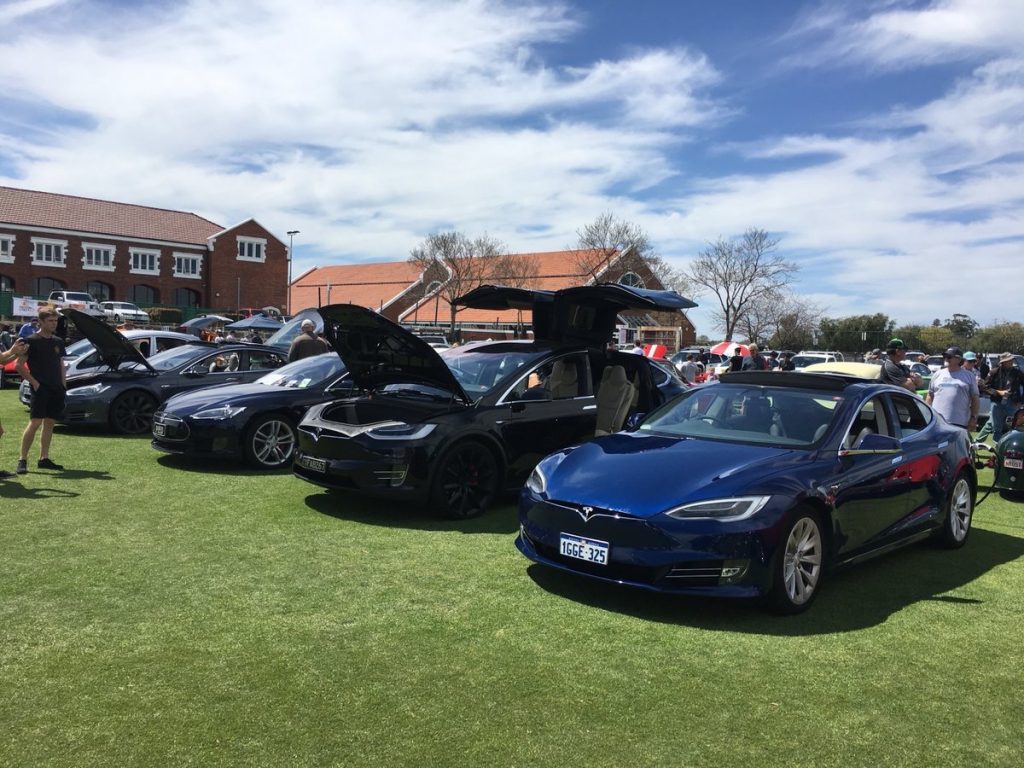